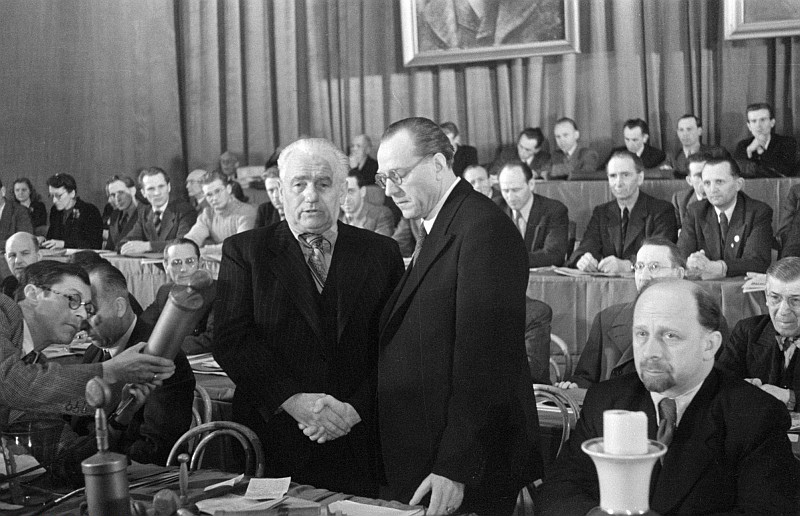 Although the GDR was a one-party state, some other institutional popular front parties were permitted to exist in alliance with the SED; these parties included the Christian Democratic Union, the Liberal Democratic Party, the Democratic Farmers' Party, and the National Democratic Party. In the 1980s, the SED rejected the liberalisation policies of Soviet leader Mikhail Gorbachev, such as ''perestroika'' and ''glasnost'', which would lead to the GDR's isolation from the restructuring USSR and the party's downfall in the autumn of 1989. The SED was officially organized on the basis of democratic centralism. Theoretically, the highest body of the SED was the Party Congress, convened every fifth year. When the Party Congress was not in session, the Central Committee was the highest body, but since the body normally met only once a year most duties and responsibilities were vested in the Politburo and its Standing Committee, members of the latter being seen as the top leadership of the Party and the State within the State Council of East Germany from 1960 replacing the President of the German Democratic Republic.

Ideologically, the party, from its foundation, adhered to Marxism–Leninism, and pursued state socialism, under which all industries in East Germany were nationalized, and a command economy was implemented. The SED made the teaching of Marxism–Leninism and the Russian language compulsory in schools. Walter Ulbricht was the party's dominant figure and effective leader of East Germany from 1950 to 1971. In 1953, an uprising against the Party was met with violent suppression by the Ministry of State Security and the Soviet Army. In 1971, Ulbricht was succeeded by Erich Honecker who presided over a stable period in the development of the GDR until he was forced to step down during the 1989 revolution. The party's last leader, Egon Krenz, was unsuccessful in his attempt to retain the SED's hold on political governance of the GDR and was imprisoned after German reunification.

The SED's long-suppressed reform wing took over the party in the autumn of 1989. In hopes of changing its image, on 16 December it renamed itself the Party of Democratic Socialism (PDS), abandoning Marxism–Leninism and declaring itself a democratic socialist party. It received 16.4% of the vote in the 1990 parliamentary elections. In 2007, the PDS merged with Labour and Social Justice (WASG) into The Left (''Die Linke''), the sixth largest party in the German Parliament following the 2021 federal election. Provided by Wikipedia
Showing 1 - 20 results of 91 for search 'Sozialistische Einheitspartei Deutschlands', query time: 0.05s Refine Results